Sarah and I recently spent some time up in the Highlands of Scotland.
We went up to visit some friends and travel up to Skye with the possibility of a nip across to Malaig via the ferry to see the white sandy beaches they keep up there. We took some time out to visit with Chris Grant and couldn't resist a day at the coast with the boats and lime kiln at Boddin point. 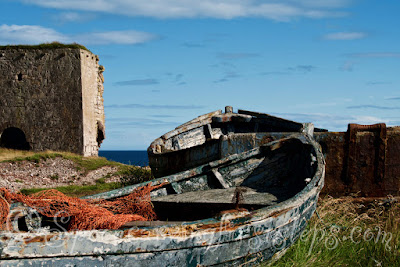 On the way up we spent some time with Willow Lohr.
Willow and her daughter Kaya looked after us whilst we were in the Cairngorms.
Willow kept both Sarah and I entertained and busy feeding her sheep and helping out with her bees.
She had us suited up helping with a combining of two hives.
We were accompanied by eighty thousand bees buzzing about.
We thought it was prudent not to mention how I was crowned the wasp king some years earlier by Kaya.
Willow also spent time showing Sarah how to identify a few of the lichen species that can be used for natural dyes. Needless to say we now have bags of lichen and pots of chemical dotted about our home.
Willow is a very skilful bushcraft instructor and if you ever get the chance of joining her on one of her courses you will, quite quickly, become far more enlightened on the subject.
We're hoping she can take time to visit when she comes down this way for the Wilderness Gathering. 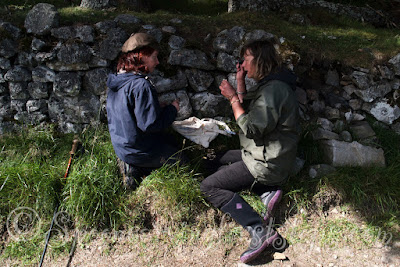 After some time we packed up and moved on to make camp at Glen Affric.
We decided to hammock camp and made ourselves cosy with the usual gear.
We managed to cover both hammocks with the Jerven bag this time out. Sarah decided she was far too hot so I re rigged it for one. The poncho liners were pressed into use as under blankets and we used our Snugpack sleeping bags as duvets. 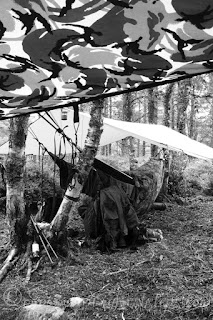 A spot of foraging yielded some Chanterelle which I fried in butter then added egg for a breakfast or two, I may have accidentally added some bacon as well. Not a bad way to start a day. 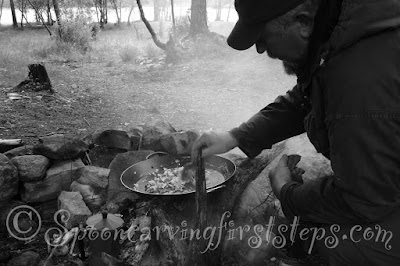 As you can see I'm cooking in a paella pan.
A trick I learned from Chris Grant.
A versatile lightweight pan option. 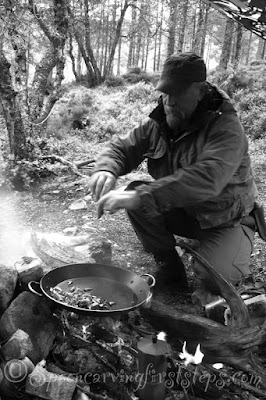 All served up in a couple of my old ale hens. 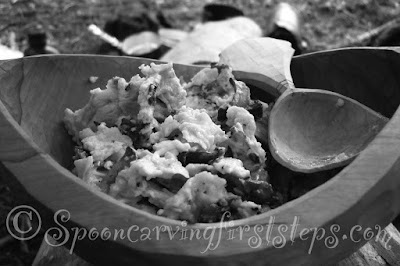 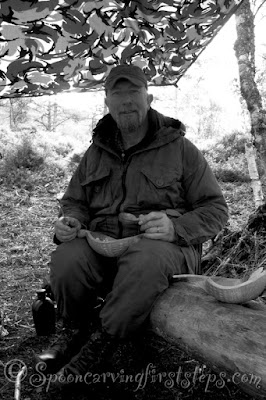 There were a few things I forgot to pack for this trip.
So I needed to make amends.
I bought a few tools to camp, axe, knife and saw.
My new prototype MaChris 'Typhoon' bushcraft knife got to see some hard work for it's first outing.
So it was off to the mainland for some suitable greenwood.
I found a large windblown mountain ash with a bit of life in it.
The chosen wood was tough and twisted, I was up for the challenge. One of the items I had forgotten was a spatular.
Roughed out with the axe we were ready to apply our spoon carving techniques. 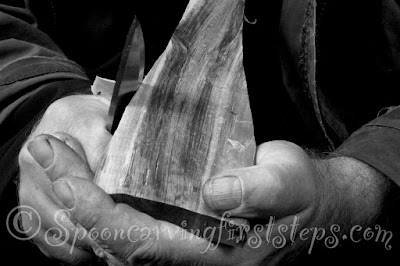 The 'Typhoon' made short work of the job.
It's not a dedicated carver, it's more robust in it's form but it still retains some of the MaChris carvers attributes. Utter comfort whilst working being one of them. 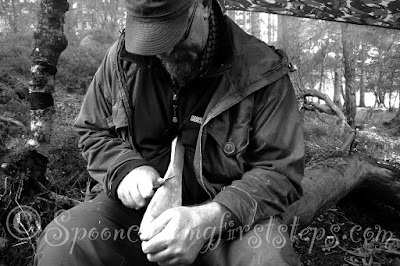 After a short while I had a serviceable spatular which was employed thereafter at breakfast time. 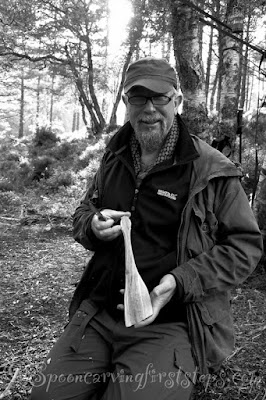 Whilst this was going on Sarah went about the place looking for suitable firewood.
Keeping a fire going is important at this time of year to keep the ferocious midge at bay and to dry washing. 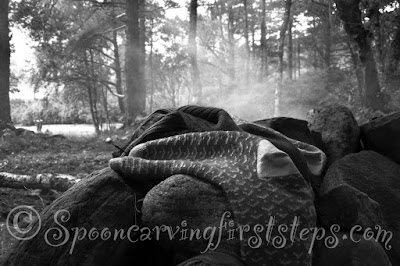 I must say that the foraging was pretty good here at Glen Affric. 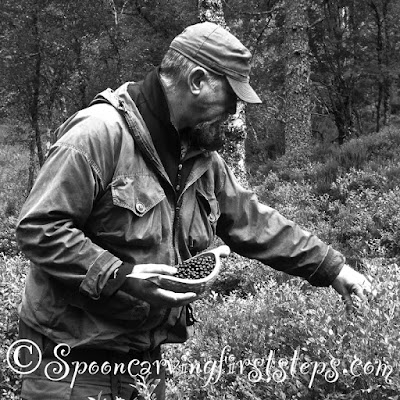 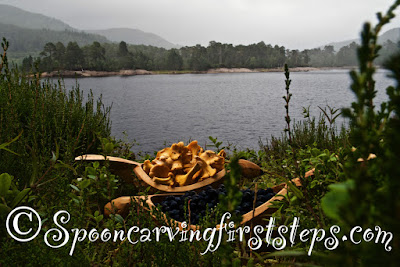 And the ale hens came in useful. 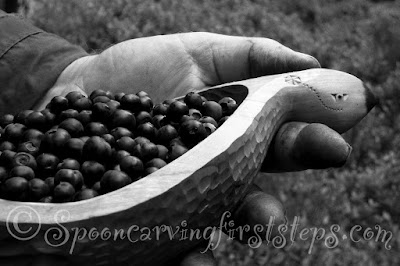 After a few days we decided to move on toward the Isle of Skye.
We toured both the rabbit ears of the island whilst basing ourselves at a sheltered camp site hard on the sea shore. 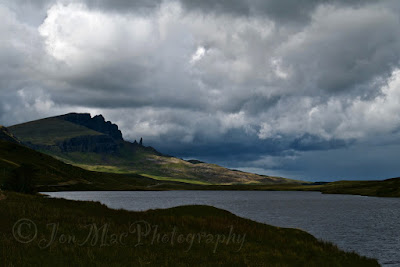 We camped under our shelter sheet and made ourselves comfortable.
Not a bad view from the bedroom. 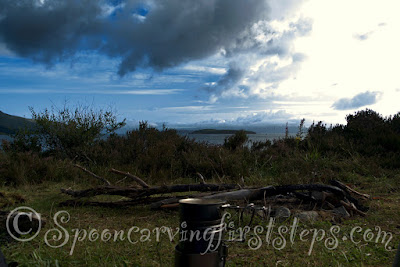 It  was all very lovely until a storm hit. We spent a night in fear of the banshee as the wind blew and blew. I had to get up during the night a couple of times to trim the lines. We had a wooden lean-to shelter in the forest we could have used, but I decided we would be safer leaving our camp and beating a retreat. 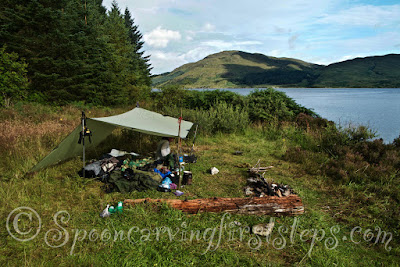 During this time I was pondering another way of carving a spoon without a hook knife. I'd left mine behind during a moment of forgetfulness.
I was shown a book about Japanese spoon carving a year or so back. I wanted to buy a copy but they are exchanging for silly money right now. My 'Typhoon' needed another test so I started to unravel the means to carving a spoon without a special hook tool. 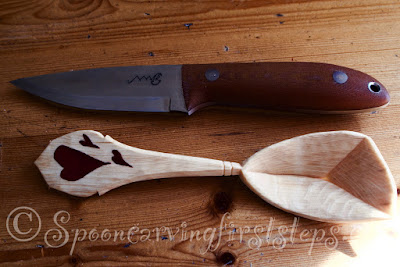 I have written a blog post in the past with an idea for spoon carving without a hook knife.
I think this solution is more elegant. 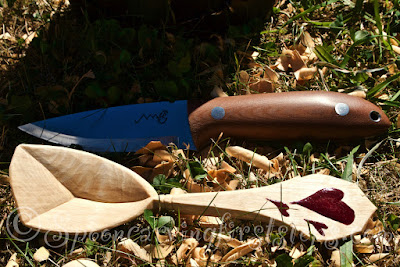 The MaChris Typhoon is made with a Wonderfull steel called Niolox.
The edge holding is, so far, impressive. 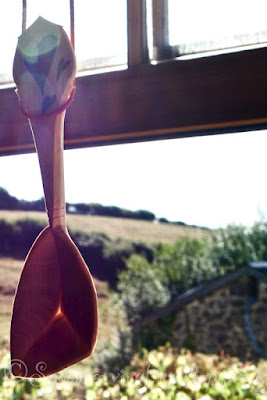 I will write up a quick how-to when this next busy period has closed.
Thank you once more for popping in.