My Mark...A short story by Sarah.

Jon always signs his work with his own special mark. 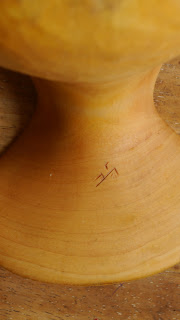 He was asked about this during an exhibition and the story was much enjoyed.


It is his initials made into mountains and a moon.
It also represents the most amazing night we spent together when we were travelling in France.


We were travelling from Geneva into the French Alps. Jon had been in France for a couple of months. I flew out to join him as soon as I finished work.


He picked me up from Geneva airport in the late afternoon. By the time we were out of the city and heading for the mountains it was already getting dark.


It was a beautiful clear night and the moon was full and shining very brightly.
It was a special moon because it was a blue moon - once in a blue moon you get two full moons in a month.


The moon was so bright the mountains were clearly visible and the roads were the most amazing silver ribbons between them.


We stopped a few times on route just to take it all in. As we stood soaking in the view all we could hear was the song of the crickets.


It is a journey we shall never forget.
J+S