HMS VICTORY
The only surviving warship that fought in the American War of Independence, the French Revolutionary War and the Napoleonic wars.
This 100 gun man'o'war was laid down at Chatham docks in the year 1759. She was completed in the year 1765 and after sea trials she was put on the 'ordinary' list of reserves. In 1778 she was commissioned into the line as Admiral Keppel's flag ship when France joined the American War of Independence.

This mighty Oak warship won many battle honours during her service, perhaps the most famous for the people of Britain was her victory over the combined Franco/Spanish fleet off Cape Trafalgar in 1805.

She was by that time the flagship of Admiral Lord Nelson. Her captain at Trafalgar was Thomas Masterman Hardy.

Her crew of 820 hailed from the British isles (700) and (120) from 18 other nationalities including Americans.
At daybreak on Monday the 21st October 1805 Nelson's fleet of 27 engaged the larger Franco/Spanish fleet of 33. A great sea battle ensued.

At about 13:30 the enemy were routed...
17 enemy ships had been captured.
Admiral Nelson had been killed by a French marksman shooting from the fighting tops.
There was much loss of life and bloodshed.

But the threat to Britain had been removed.

Nelson's body was bought back to England pickled in a barrel of Rum.

Over night he became a national hero...

H.M.S Victory now rests in dry dock at
No2 Dry Dock Portsmouth's Royal Naval Dockyard.
She has, over the years, been restored to her former glory and work still goes on keeping her ship shape.

My old friend and master spoonmaker Ralph Hentall gifted me a couple of pieces of the old Victory. He is often given pieces of wood that have historical bearing with which he carves commemorative spoons. These are often sold with the correct letters of proof, and the money raised goes toward further restoration of the specific project.

Well, this piece has been sitting at home with me for some time now. I finally decided that I should make a basic, simple spoon from the piece; a spoon that a matlo serving aboard Victory might have carved with his knife. 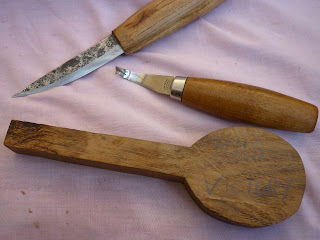 As you can see, the spoon blank was already cut out by band saw so there was limited room for manoeuvre. 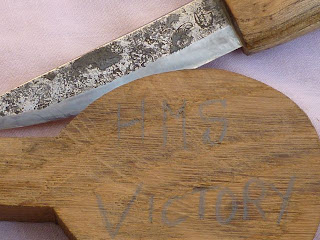 I recently saw a film that included some footage of Russian folk eating from large bowled spoons, much like metal soup spoons of today. I decided that given the food aboard a ship 'o' the line back in Nelson's day would have been quite basic, I would carve a spoon to suit. 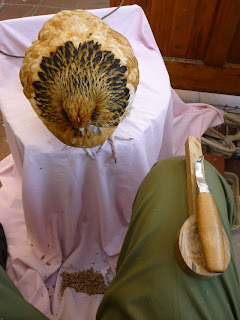 I perched 'Choti' on my carving stump so I could keep an eye on her, she is getting stronger by the day but still needs supervision. 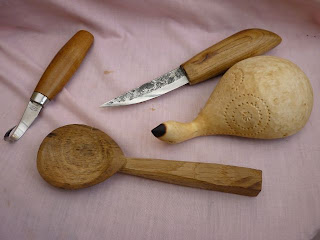 The handle ended up with an octagonal profile... 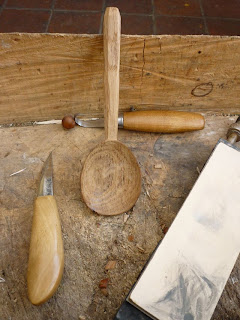 The Oak is old and hard and although my knives were super sharp and kept a good edge I had to polish them from time to time on my King water stone. 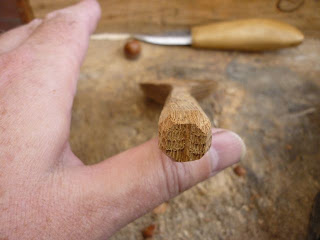 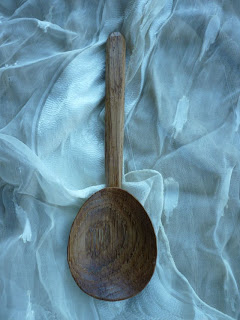 No decoration save for a single 'V'... 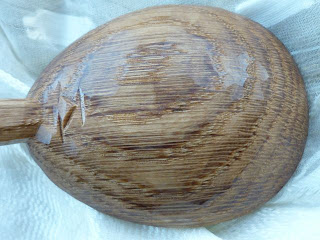 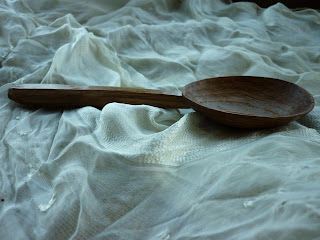 More information about the on going restoration of this magnificent ship can be found at...
H.M.S Victory

Oh ! And by the way. Remember I mentioned that Nelson's body was pickled in Rum for the return journey ?
Well, folk lore has it that the sailors aboard Victory drilled a tiny hole in the great barrel containing his body.
They used straws to sip the Rum from the barrel.
Once home the barrel was found to be empty of Rum and only containing the body of Nelson.
So next time you take a tot of Rum for free you will be
'Tapping the Admiral'...
A phrase still in use here in the West Country...