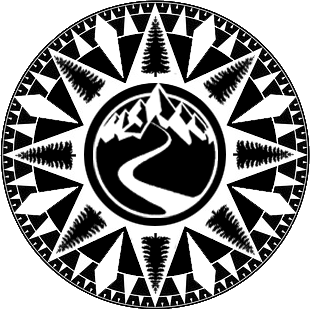 My good friend Mark Lane sent me an e mail the other day. He suggested I get up at a good hour on Saturday morning so he could pick me up and take me to a near-by forest for some tracking and stalking tuition.
Back in the day I was quite used to being woken in the middle of the night by the sharp shrill alarm of the telephone...Someone the other end of the line would give me a grid reference and a quick over view of the call out we were about to under take. With these messages came a large dollop of adrenalin that would coax you through the first stages of readying your tea/coffee and rations for a long nights search, dressing, grabbing your Bergen pack and then the drive through what was usually dreadful weather to the R.V. The adrenalin would usually last until your team had been briefed, supplied with various specialist equipment and finally deployed.
Well....

None of that happened on this morning.
I awoke and made a good strong pot of coffee to have with some Irish boiled fruit cake as is my habit of a morning.
Mark arrived promptly and off we went.

We had a good old blurry first thing in the morning chat as we made our way to the forest on the other side of the valley.
Mark provides tracking and wilderness skills training for 'Devon Discovery'. He is an associate at Embercombe and runs his own, very well crafted, skills training from a forest location in the Teign valley.

We arrived at the forest and sorted out our kit for the day. (I found that my small Platypus water bladder had sprung a leak, won't be relying on that type of water carrier again. Back to a proper metal bottle for me.) The sun had yet to rise and all was quiet. As we put on various coats and Bergen's Mark made an off the cuff comment that there was a possibility that someone would soon pass us and enquire as to our business.
Well that person soon arrived in the shape of the local game keeper.
We had a chat with him and set off for the forest clearing where Mark would run me through some zoning in exercises...
We arrived at about 6am, dark and warm. 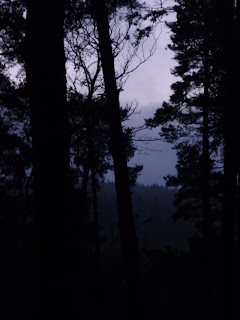 Mark asked me to find a nice comfy spot where I could quietly sit and 'Zone In'...
The forest was peaceful and quiet except for the occasional call of a distant owl and the bark of a local Fallow deer. I let my mind drift into the forest. 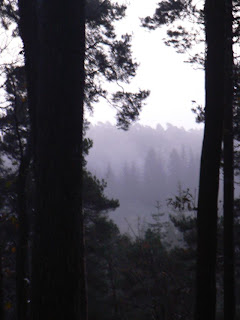 As the light came up there was a sudden explosion of barking and screeching... A squirrel's drey had disgorged it's squabbling contents into the day. A few seconds later I heard that distinct whirring sound, as if a round you had sent up range had deflected, and was now heading back down range...I was crouching in the leaf-mould........ I tensed and made myself small as I knew something bad was about to happen....And a crunch ! as a large branch landed close beside me. It had fallen from way up in the canopy of the Scots pine I was beneath. Mmmm ! That's lucky I thought, as Mark appeared out of the morning light. 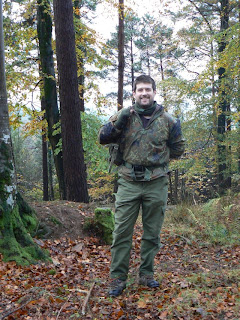 Mark briefed me as to what we were going to achieve during the day. The first thing he did was to run out about 100 metres of fine cord, at about shoulder height, through and around the trees with twists and turns. I was blindfolded and lead to the start point of the course. Mark had explained that this was a 'Sensory/Physical awareness exercise.
By denying visual senses you force your other senses to work harder – hearing, smell, touch. It improves foot placement and balance. It slows you down and helps you understand muscle control and balance.
I set off, placing my feet purposefully so I could understand the nature of the obstacles before me.
As I moved carefully along I began to think of my whole body balance, my breathing became heavier as I tensed-up. Didn't expect that to happen. My thoughts turned to my feet, knees and hips. A life time of lifting, carrying and working in the out doors has taken it's toll on these joints, because I had to test each step these places where put under abnormal stress. I stopped.... I realised that my internal dialogue was becoming so loud  I could no longer hear the call of the wild going on all around me, the morning watery bird song and the tap of a wood pecker. I started off again. This time ignoring my internal and concentrating on the external.
Soon enough I had reached the end of the string maze.
This little exercise had highlighted the way I move through the forest and my interaction within it. I used to rely on my inner calm and awareness arriving unheralded on my walks. I may now be able to get into the flow of things quicker than in the past. 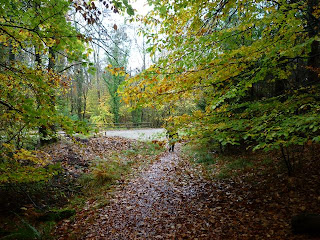 Stalking / moving quietly - focussed on breathing, vision (peripheral vision, ground mapping), balance (engaging core muscles and lowering centre of gravity), foot placement.
Now I had tuned in my balance Mark explained how it is beneficial to be able to quickly map the terrain you need to move over, keeping your vision busy looking for Shape, Shine, Shadow, Silhouette, Movement and your ears busy listening for Sound - rather than spending  time looking at the ground.
As a retired Search and Rescue team member I know how difficult this can be. But once we had slowed things down it became comfortable.

After a brief chat Mark decided we could move into the close cover of the forest and try out my new skills.
One of the first things we found was a bird 'kill site'.
We stopped to investigate and decided that the blackbird was probably taken by a Sparrow hawk. We looked closely at the feather Calamas, the hollow shaft that grows from the bird. Mostly the Calamas was crushed suggesting a raptor, although some were chewed signalling the presence of Mr Rat who probably visited after the Sparrow hawk had finished its' meal.

Mark then found some fresh Fallow deer tracks. He showed me a super trick using two rubber bands to measure stride length and to help identify where the next track was. I popped the two bands on my walking stick and Mark showed me how to use this useful tool.
You can just make out the bands on Mark's stick as he searches for a missing print. 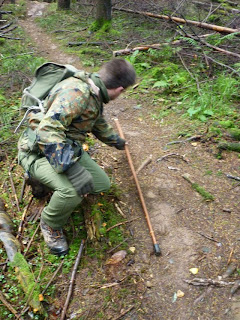 We also talked briefly about using 'baseline' behaviour of an animal to identify its direction and rhythm. We moved quickly to get closer to the animal, we took care to allow for changes in baseline behaviour, the animal moving off the trail. In this case we found a 'lay-up' but the deer heard us and moved on. We could see the fresh prints and then they stopped. They must have moved off the track. We used the stick trick to find which direction they had moved in. Had they turned left and jumped the stream ? Whilst Mark cast about for the next print I looked at the puddles further along the track. The water was clear so they had not passed that way. Mark found prints near the stream, they had crossed. 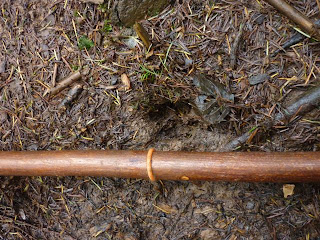 One of the bands and a deer print is seen directly above... 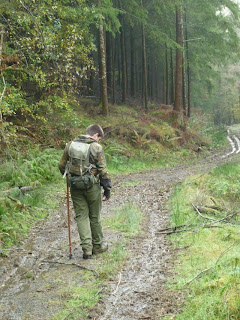 Well we lost contact with that group.
As time was running on we wanted to get to another part of the forest. Here Mark has access to some super woodland where he runs his courses.

We carried on searching for tracks and sign and experimenting with the measuring trick.
A set of badger tracks seen just below the rubber bands... 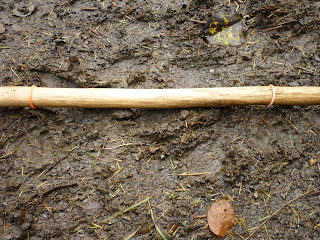 ...shows how a light source can highlight up fine detail. 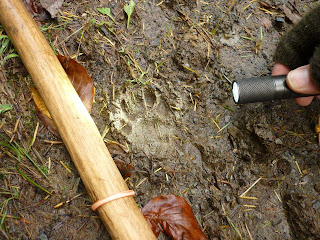 You can also use a mirror, although there was not much light to talk about at this stage of the day. 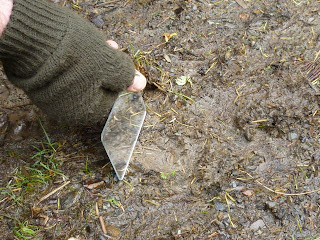 We found some more sign.
Fresh shiny deer droppings with the distinctive bottle shape and dimple. 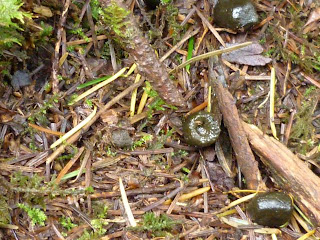 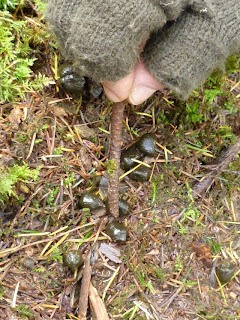 And after a little more work we finally managed to photograph our friends the deer... 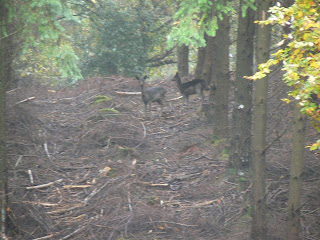 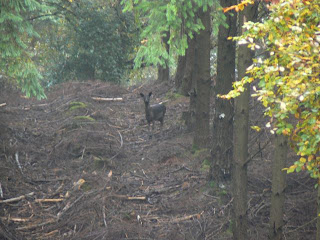 We were now close to a place where we could light a fire and settle down to some lunch.
Mark picked up some Birch bark and we collected some twigs from nearby pine trees.
Every thing was damp after the rains we have had, and boy, has it rained.
I usually carry a tiny stick of resinous pine root that I was given the last time I was up in Scotland with Chris Grant. If you fluff it up using the spine of your knife you will make tinder that will ignite quickly once a spark has been introduced.


With our sticks and tinder Mark managed to make fire, good going considering the dampness of all our makings... 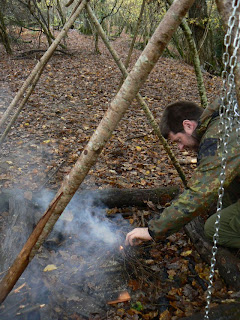 Once the fire was going Mark cooked us some wonderful sausages... 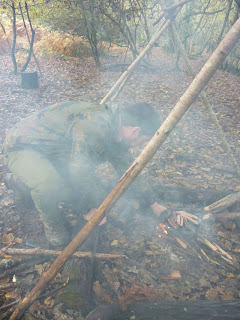 What a great way to finish the course. 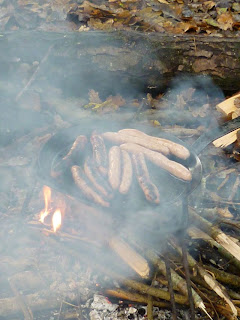 We sat and ate together and discussed the mornings work.
Now I have been given the skills to vocalise what comes naturally when I am out and about, I believe I can hone my natural skills and become a more accomplished stalker/searcher. Mark has given me the tools to understand my journey through the forest in a different light. 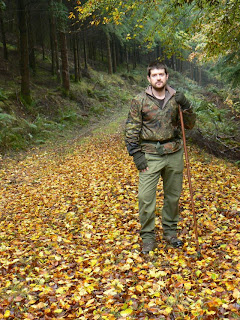 I can't tell you how much I enjoyed my time with Mark and I would highly recommend you spend some of your time with this remarkable chap...
Wilderness Guide. 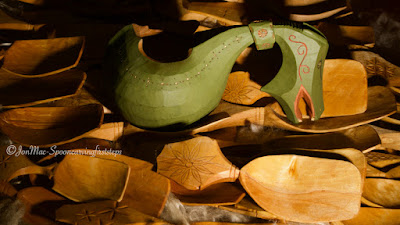